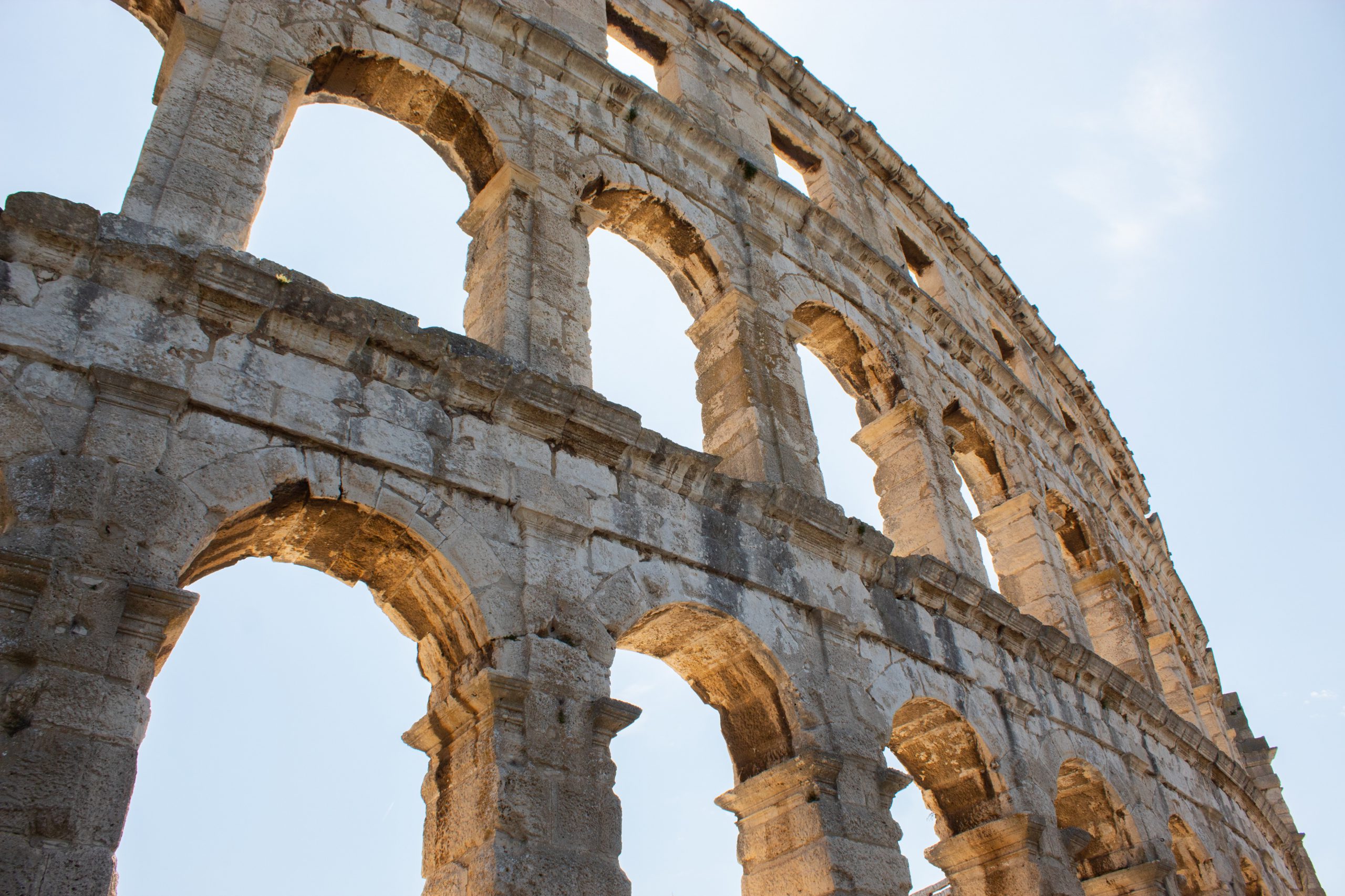 Do you know what the cool places in Croatia in 2020 are?

Croatia is a small country whose tourism is booming but isn’t yet world-famous. Those who have heard of this country would probably not know how to find it on the world map. But Croatia is really full of magical places. Let us take you on a journey through this little piece of paradise on earth.

In case you are planning a road trip through Croatia, we suggest you follow this guide from the north to the south of the country. If you are arriving by plane or just passing by, try to stop by at least some of the following places.

Located in the north of Croatia, this beautiful city will delight you with its Baroque architecture, a beautiful castle in the Old Town, and a few festivals. For instance, there’s the Fontana Blues Festival in July every year. It hosts a dozen blues musicians performing outside of the Croatian national theater.

Moreover, there’s the infamous Špancirfest, which begins at the end of August and lasts until early September. It is a multi-performance festival with live music, theater, street performers, and food. Last, there are Varaždin Baroque evenings in late September, where you can dive into the Baroque times and dance the night away in a dance hall, wearing a gown.

Next, one of the best places to visit in Croatia is Zagreb. The capital of Croatia is located on the river Sava, at the foot of the mountain Medvednica. Known for its Austro-Hungarian architecture, its many parks, and charming streets, it attracts tourists from all over the world. In recent years, it has been one of the most visited European cities during Advent.

Since it is the capital and largest city in Croatia, it’s best to spend more than a day here, and allow yourself to fall in love with its historic Upper Town, the multicolored Lower Town, and the relaxed culture of sitting in cafes and restaurants. Renting a bike might be a good idea, as you can see most of the city while riding.

If you are headed east and want to explore Slavonia in eastern Croatia, then Osijek is definitely worth it. Baroque architecture, an 18th-century fortress, and a zoo will take you at least a day. Still, if you are interested in exploring the surroundings, we suggest visiting Kopački Rit, a nature park that is one of the most preserved wetlands in Europe.

If you decide to go south of Zagreb and get to the coast, you need to see Rijeka. It is the main port of Croatia, located in the Kvarner Bay. From there, you can either go to the heartland of Istria or one of the neighboring islands, like Cres, Lošinj, Mali Lošinj, Rab, or Krk.

Romanesque, Gothic, Renaissance and Baroque architecture will leave you breathless, just like the vibrant nightlife, especially during the summer. There is a couple of festivals, such as Rijeka Carnival, Jazz Time, and Ri Rock Festival.

If you head west from Rijeka to Istria, one of the best places to visit in Croatia is Motovun. It is a small picturesque medieval town 270 meters above sea level with houses scattered all over the hill. Try to come here during the Motovun Film Festival, which starts at the end of July and lasts until the beginning of August every year. The festival hosts independent and small production films from around the world. You won’t see red carpets here but instead watch films under the stars or in the shade of old trees.

When you are in Istria, Rovinj is something you should not miss. The enchanting small town will make you fall in love with its narrow streets, romantic balconies, multicolored houses, small shops, and cafes.

Plenty of restaurants and taverns offer specialties from locally sourced ingredients, and the chefs are very happy to explore new flavors. Rovinj is also extremely attractive to artists – it houses numerous art galleries spread over picturesque stone streets and every season you can purchase art from local and foreign contemporary artists. After you’re done with the sightseeing, head to one of the beautiful beaches in the area.

Pula has also made its way to our list of best places in Croatia. Why? This city rose to its fame in ancient Rome when it was called Iulia Pola Pollentia Herculane. The legacy of that glorious age is not only visible today, but also forms the main backbone of the city – the Amphitheater (Arena), the Little Theater, the Arch of the Sergius, and the Temple of Augustus at the Forum. These old sights still make it one of the favorite tourist destinations for those eager for cultural and historical experiences.

Many have written about Rastoke for a reason since there is so much beauty in such a small area. This gorgeous water-mill settlement connects on two rivers, Slunjčica and Korana, which flow over travertine barriers and turn into beautiful waterfalls. One hundred meters away, you can even bathe, since there is a swimming area on one part of the coast. Rastoke is a part of the town of Slunj, where you can see the restored fort, as well as enjoy the view of the church of the St. Trinity, or walk around the central city park.

Once you reach the Dalmatian coast, you cannot bypass the Roman and Venetian ruins in Zadar. In case you are not a fan of old sightings, check out the Greeting to the Sun – a floor-mounted installation with glass panels that collect solar energy during the day and make a light show during the night.

The medieval architecture city is great for visitors with children since there are no crowds like in famous cities such as Split or Dubrovnik. If you’re interested more in Zadar, check out what are the best things to do in Zadar.

Šibenik is a historic town located in central Dalmatia. There are four fortresses surrounding the city. The most famous and the first restored is the fortress of St. Mihovil, which houses a cafe and an amphitheater stage, where you can go to concerts, dance events, and film screenings during the summer. What’s more, a beautiful coastline and romantic small streets are what make this city one of the best places to visit in Croatia.

11.The Island of Vis

The island of Vis is a rare Mediterranean pearl of exceptional natural beauty, rich cultural heritage, fishing traditions, and friendly locals. An island that will fascinate you and show you a completely different world where everything is simple, relaxed, and unique. Moreover, you can spend the warm summer nights at the open-air cinema that works throughout the summer.

Vis is one of the best places in Croatia to taste the most famous white wines and offers excellent seafood in its little restaurants. Stiniva and Zaglav are some of the famous beaches that both locals and tourists come to. So, when you’re tired of the city, make sure to dive in. From there, you can also visit the blue cave near the neighboring island of Biševo.

The island of Mljet is located near Dubrovnik, Pelješac, and Korčula. Due to its natural beauty and crystal clear sea, the northwestern part of the island has been declared a national park. Except for the national park, you should visit St. Mary’s Island with a Dominican monastery, Romanesque-Renaissance-Baroque architecture, sandy beaches of Saplunaru and Blaće, Ancient Palace, Odysseus’s Cave and the Great and Small Lake.

You can try the rich gastronomic offer in numerous restaurants and taverns. Make sure to try the eel, which is one of the most popular specialties of Mljet. Due to the lack of clubs and bars that work late into the night, Mljet is an ideal choice for anyone who wants to spend a quiet holiday enjoying the natural beauty of the area.

Do You Agree With Our List of the Best Places to Visit in Croatia?

After we presented to you the best places to visit in Croatia, where would you go in 2020?