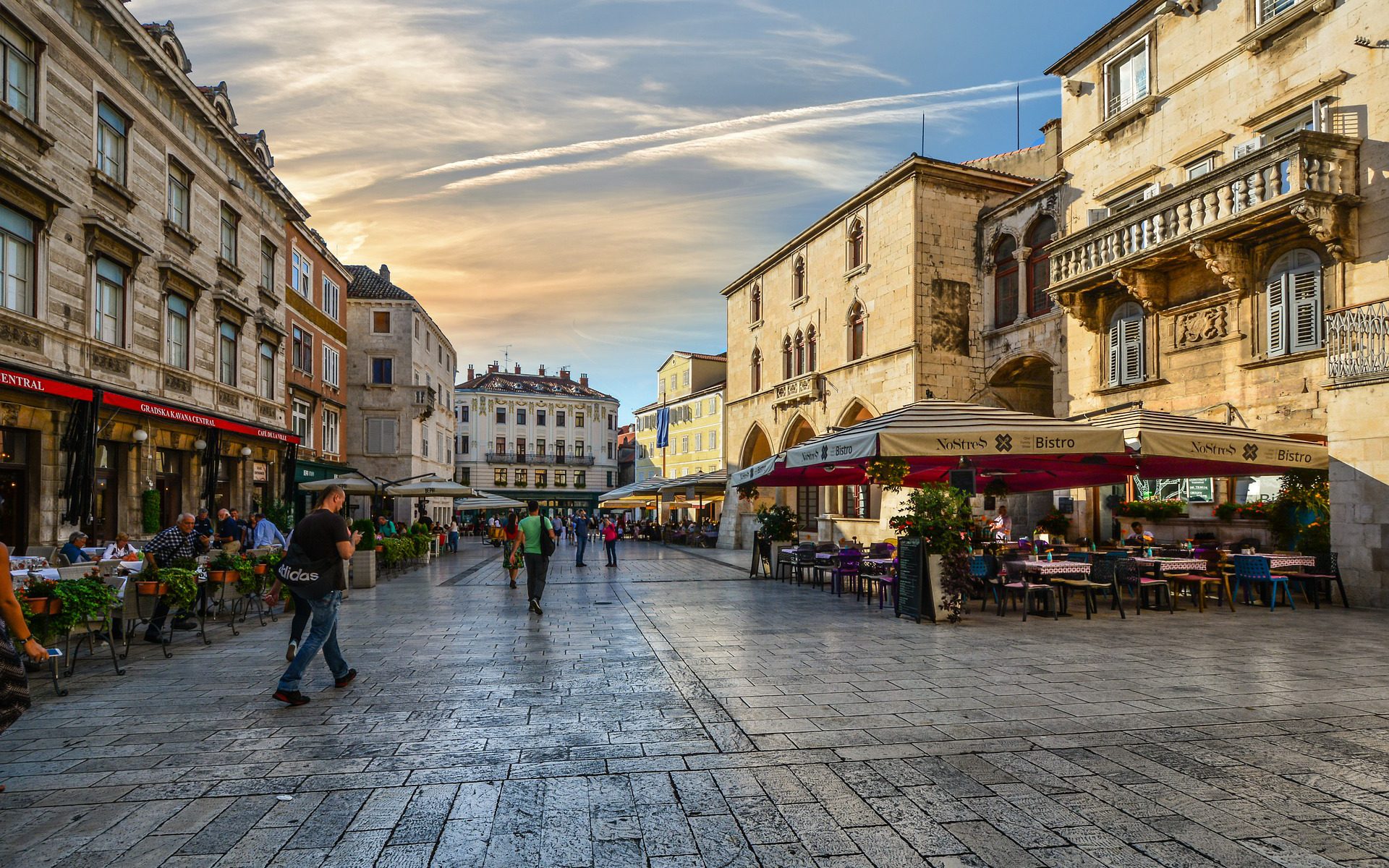 Split is the largest city in Croatia’s coastal region. It offers a variety of activities for visitors throughout the year. The charming Mediterranean architecture and the proximity to crystal clear Adriatic sea are what makes this place a perfect tourist getaway. So, if you ever considered this area for your next vacation, let’s check out all the cool things to do in Split Croatia this Summer.

One of the first things that come to mind when visiting Split is exploring the old town. Although about 300,000 people live in its urban area, Split has managed to preserve the beautiful architecture from the 4th century. Diocletian’s Palace, which you can find on the UNESCO’s World Heritage list (along with six other sites in Croatia) is the most visited fort structure in this part of Croatia.

It is not a real palace but rather a fortress in which the Roman emperor Diocletian had his private houses and a military garrison. The complex has several landmarks, such as the Cathedral of Saint Domnius (Katedrala Svetog Duje). Its bell tower gives a gorgeous view of the city, and you can climb up there for a small admission fee. In the inside of the cathedral, you can find the mix of ancient pagan, Christian Medieval, as well as modern heritage.

Another landmark in the Diocletian palace complex is the Peristyle, a central square with two Egyptian sphinxes that had a ceremonial function in the Roman times. The palace has four big gates, one gate on each side: the Golden Gate, the Silver Gate, the Bronze Gate, and the Iron Gate. Outside of the Golden Gate, you can find the statue of Gregory of Nin (Grgur Ninski), the work of famous Croatian sculptor Ivan Meštrović.

If you like guided tours, make sure to book a 3-hour guided walking tour with lunch. On the other hand, if you want to book a villa in Croatia and you prefer to explore its cities by yourself, you can get lost in the lovely cobblestone streets of the ancient old town of Split.

Except for the outdoor architectural wonders, Split is full of Museums and art galleries worth visiting. They aren’t as famous as other museums in this part of Europe, but nonetheless attractive to those who like to consume as much culture and history of the city they’re in.

You’ll have a great time visiting the Split City Museum (Muzej grada Splita) and finding out about the city’s history. In case you prefer to learn about Roman artifacts, make sure to purchase a ticket for the Archaeological Museum Split (Arheološki muzej Split).

The third one, Ethnographic Museum Split (Etnografski muzej Split), displays the artifacts that the inhabitants of Split used throughout history. You can see traditional clothing, jewelry, and furniture from several eras in city history.

As for the art galleries, there’s an extraordinary exhibit of the works of Ivan Meštrović, already mentioned Croatian sculptor. He gained an international reputation in the 20th century. His former property now houses over 100 pieces, and you can find it under the name the Meštrović Gallery (Galerija Meštrović).

Once you get tired of sightseeing and visiting museums, it’s time to relax with a glass of beer. In the last few years, the Croatian beer scene got stronger with a few new names appearing on the craft beer lists.

Pub crawling is perfect if you want to get a taste of Split nightlife, as well as enjoy great beer. If you’re a lager lover, you’ll find it wherever you go. As for the craft beer, there’s a ton of local options for you to try out. You can experience Ziggy Star Pub crawl with two biggest local breweries, Mandrill Nano Brewing Co. and LAB.

The fourth on the list has to do with food and drinks. Yes, we already mentioned beer. However, what about Croatian wines and fine dining? Luckily, you have a plethora of options to fine dine in Split. The city is full of restaurants and wine bars. We’ll mention some of the most popular ones.

People of Split really know how to enjoy their food. Every restaurant meticulously prepares excellent food of local origin and has extraordinary service. You can check out Zinfandel Food & Wine bar, ZOI, Mazgoon, or Kinoteka Food and Bar. Wherever you decide to go, you’ll return to your stay amazed by the food and wine you just consumed.

5. Spend a Day at the Beach

When history and fine dining isn’t your thing, and you simply want to relax at the beach, there are a few places to go to. One of the cool things to do in Split is visiting some of Split’s famous beaches.

If you like water sports, cafés and don’t mind crowds, head to Bačvice beach. It’s the only beach in Split where you can play picigin (a traditional beach ball game) with the locals, and it’s quite close to the city center. Southeast of Split you’ll find other nice beaches, such as Firule and Žnjan.

Other beaches worth visiting, Ježinac and Bene, are near the Marjan Hill. Those have far fewer visitors than the beaches near the center. It is especially important for families with little children. You can have an eye on your loved ones if there’s less crowd, so you might want to go there instead.

6. Visit the Market and the Promenade in Split Croatia

Split’s promenade (Riva) is a gorgeous waterfront in the heart of the city, where both the tourists and the locals drink coffee during the weekends. Except for bars, you can find restaurants and souvenir shops on the promenade.

The Promenade’s renovation in 2007 enraged the locals. They organized a protest against the new white and shiny look. However, the renovation was one of the best decisions of the city council and is now a true landmark of the city.

If you go to the East, there’s a green market (Pazar), where you can buy fresh produce. A bargain with the locals is a must. The best time to go there is past midday, before the closing time. Naturally, you’ll go to purchase fresh vegetables if you booked a fully-equipped villa and love to cook for yourself and your family.

The locals will gladly lower the prices of their products once they see you’re up for a bargain. It’s also a fun way to get to know the city’s soul.

If you aren’t as good at cooking and want to experience authentic cuisine, you can book a cooking class in Split. The locals prepare and eat dishes typical to the Mediterranean region, with a lot of bluefish, green veggies and lots of olive oil.

In case you want to go outside of the city center borders, there are other things to do in Split. Go and visit Marjan Hill, the hilly 170-meter tip of the peninsula. Locals go there for long walks in the forest, as well as visit Medieval churches built there. The Hill is the perfect place for all of those rock climbing lovers. Marjan crag hosts climbing events all year round.

Marjan climbing area has a few routes for experienced climbers. Šantine Stine, the 40-meter high cliff is the place where they can climb up mostly vertical routes, from the levels 4c to 8a, as well as the routes from 5c to 7a. 1986 was the most prominent year for climbing in Croatia since Marjan entered the history of world climbing as one of the natural places where the fourth free climb competition in the world was held.

Did you spend 5 or more days only in Split? It’s time to go elsewhere in the region. Only six kilometers away, there’s Solin, a small town, known as the former Roman province of Dalmatia. The town is full of Roman ruins, and you can go there by bus, by car, or book a day tour.

Another picturesque piece of ancient architecture outside of Split is the Klis fortress. It is situated between the Mosor and Kozjak mountains. Klis is a large piece of Medieval fortification architecture that today consists of ruins, a church, and a museum. All of you Game of Thrones lovers probably know that the site was used as a set for Meereen scenes in the HBO’s extremely popular series. Feel free to book a Game of Thrones tour if you’re a die-hard fan of the show.

The last fun thing to do in the Split region is ziplining over the Cetina river in the nearby city of Omiš. The 2100-meter long zip line is overlooking Omiš and the nearby Cetina canyon. If you’re the adventurous type of person, you can book rafting or a canoeing trip there as well.

If you already did everything above, you’ll get bored if you stay in Split. Croatia is the land of over 1200 islands and islets, with only 48 of them being inhabited. Split has a great connection to the nearby islands via a ferry route. The island of Brač and Hvar are among the most scenic islands in the region.

Except for Brač and Hvar, you should definitely organize a few longer day trips from Split. For instance, you can visit Šolta, Veli and Vis. As said, ferry boats are the best option. However, you can book a sailing tour and explore even more of the beautiful Adriatic.

The list of 10 best things to do in Split Croatia can’t be complete without sailing away. If you don’t have a special place to go to and just want to cruise in the gorgeous Adriatic Sea, you can book a sunset sailing tour for ten guests and enjoy the excellent wine and romantic sunset.

When you have a day to spend outside of Split, make sure to book a sailing tour. You’ll enjoy a fine meal and drinks while conversing about Croatia with the captain.

Which Are Your Favorite Things to do in Split, Croatia?

Split is one of the most beautiful coastal cities in Croatia. It has a lot to offer to the curious visitors and it’s a perfect getaway from your busy daily schedule. Moreover, it’s an ideal place to relax with your family and friends. If you never been to Split, you have to check out and plan all the cool things to do there before your visit. If you have been there already, what is your favorite thing about this gorgeous city?